The In-File Delta technology allows daily backups of very big files.
This technology offer the opportunity of "Differential" and "Incremental" backups depending on the use case which we'll explain in the next paragraphs.
Both methods use almost the same amount of disk space on the server.

It's the fastest method in the data restore phase. Delta is generated by the system by matching the last file saved in "Full" mode. That way, the generated Delta is a file that grows daily proportionally to the modifications, and its copy on the server will take bandwidth according to its growth. To perform a restore, the Full backup and the last Delta saved are required.

It's the method that speeds up the data saving phase. Delta is generated by the system by matching only the last increment of the file saved. That way, the Delta generated is a file that stays small and the during the transfer will take a few bandwidth. The restore requires the Full backup and all the Delta saved.

The main differences are summarized in the following table:

Delta is generated by extracting the differences between the last file saved and the original one present on the server. Both files are divided in individual blocks using the same dimension for each block. After that, those blocs gets matched amongst them to determine whether they are the same or have some differences. Differences are then extracted in the Delta file. 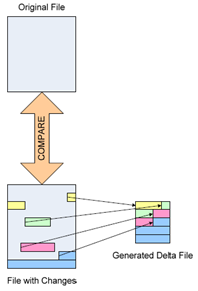 It's possible to use different settings for block size dimensions to generate. Such settings can affect the creation time of the blocks themselves and the dimension of the Delta generated. In general, the relation between block dimension and the generated Delta is:

By using the "Auto" mode, block size dimensions will be set initially on the dimension of the file according to the following table:

If, for instance, we consider a 100MB original dimension (Full) that grows at a rate of 10MB each day, the files uploaded on the server and the esteemed needed free space will be as follows: 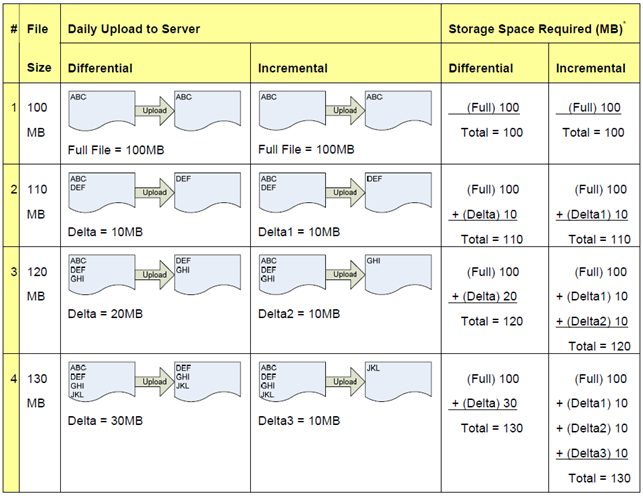 Now, let's restore the files saved in the previous example: 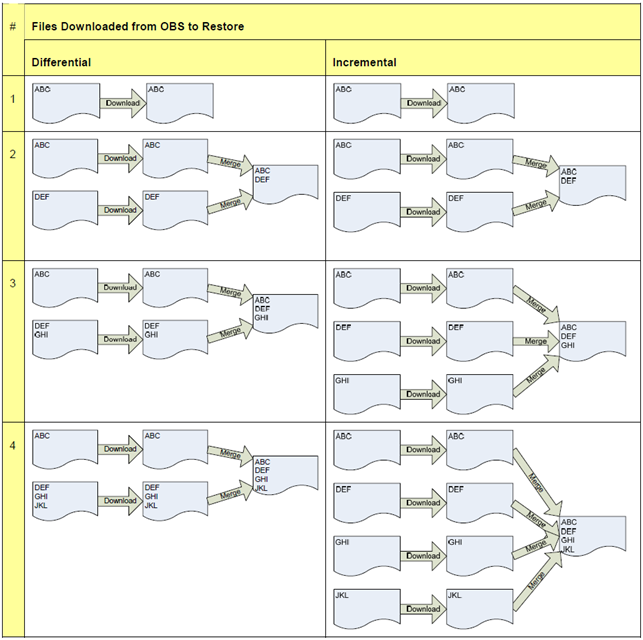 This site, or the third party tools being used by this site, take advantage of cookies necessary to the proper functioning and to offer a better efficiency of the site itself. If you want to know more about it, or deny the consent to all or some cookies, consult the cookie policy. By clicking the Accept button you agree to the use of cookies.
See Details


Technicals (1) Statistical (3) Preferences (0) Marketing (17)
Technical cookies allow you to perform the functionality of the website, ensuring its normal operation.
Statistical cookies help website owners to understand how visitors interact with sites by collecting and transmitting information in an anonymous form.
Cookies for preferences allow a website to remember information that influences the way in which the site behaves or presents itself, such as the preferred language or the region that you are
The marketing cookies are designed to create profiles related to the user and are used in order to send advertising messages in line with the preferences expressed by the same in the context of surfing the net.